Since I've been using Zbrush quite often, I've been also getting back into doing more work in Photoshop. I probably could alwaus improve on my Photoshop painting skills.  For this one, I was following a photo of Scarlet Johansson. 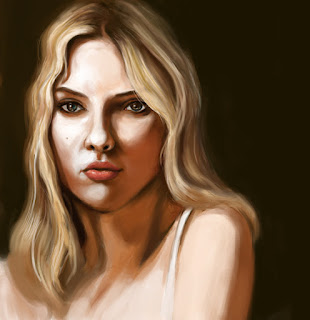 Adding some colors and details on Slimer!

Here's comic once again.  I want to keep it coming while ideas come up.  This one is based on one of those thoughts I've had.  I take it there are some fans of "My Little Pony."  And, maybe they already know the answer to the questions that are mentioned here. As for me,whenever I see pictures of the TV cartoons, it makes my head hurt.

Been making some progress on my Slimer.  He's colored now. I was watching more "Columbo" as I was working on this. I was watching the episode called "Try and Catch Me" and "A Friend in Deed."  The first one I mentioned was pretty bad ass.  Columbo is such a great show. 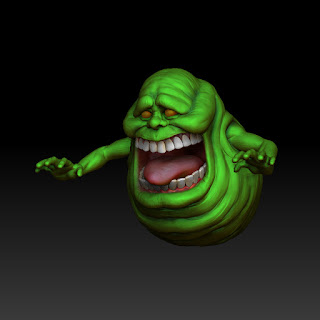 I'm going to start drawing comic strips again. A nice way to clear some cobwebs from my mind.  Meanwhile I'm going to do other works of art as much as I can.  I think the past year I've been lazy with a lot of my pursuits. Gotta make better use of my time.


I also did some more Zbrush today. I was watching some trailers and cartoons of Ghostbusters as of late, so I was inspired to sculpt Slimer!  I like Slimer because he is simple yet expressive. Very fun to sculpt in Zbrush.  He's also quite ugly. Ugly is always easier to sculpt, I have found.  No need for perfection. Creating beauty is not as easy.  I've also been watching the old school "Columbo" series on Netflix.  I love mysteries. 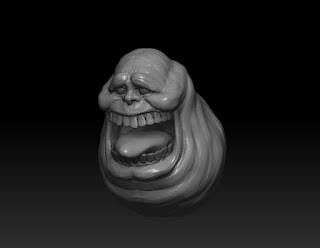 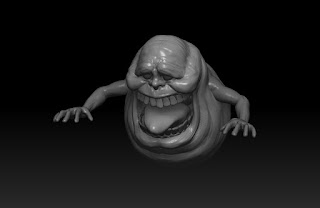 My review of 'Zootopia'!

So I saw "Zootopia" the past weekend. Tons of fun... I wrote a review on Examiner.com.

Here's a short excerpt from my review:

This film is currently playing in theaters everywhere.

In Zootopia, a big city in a world where all animals get along like civilized people, Judy Hopps (Ginnifer Goodwin) is the first rabbit to become a police officer, eager to prove herself to everyone around her. After being assigned to only write parking tickets all day, she soon finds herself thrust into an exciting missing animals case that be solved within 48 hours or she will lose her job. After teaming up with Nick Wilde (Jason Bateman), a fox con artist, her trail leads her to unexpected places and dangerous animals, political corruption, and a sinister plot that could break down the civilized foundations of Zootopia itself.

I was pretty much sold on watching "Zootopia" when I saw the brilliant "Sloth" trailer that played right before "Star Wars: The Force Awakens." The hilarious clip, which showed sloths working at the DMV, showcased the brilliant animation of the characters as well as its spot-on, clever humor. Walt Disney Studios certainly showed their confidence in their material by releasing that extended segment and it made one believe that the rest of the film was as equally great. While the film in general indeed wound up being quite excellent, the surprise was how much of this film wasn't constantly funny, but quite serious in many parts. This film is actually quite earnest and thought provoking. It manages to cleverly parallel our society using animals, a shtick that hasn't been fully used to its advantage since George Orwell's "Animal Farm."

The animation is absolutely amazing. Every detail in the movements of these characters feel animal-like, yet also fully human emotionally. The eyes, the nose, and body movements all tell a specific story about the characters. And, the voice-overs are flawless. Ginnifer Goodwin brings ton of optimistic energy and emotion to Judy Hopps. Jason Bateman, the actor, becomes completely invisible playing Nicke Wilde--he becomes the character. The environments of Zootopia are full of life, colorful, and gorgeous to look at, showcasing different districts, some big and some small, and their highly-detailed communities and idiosyncrasies. One may be reminded of the excellent "The Lego Movie" in how detailed the environments are (without being blocky).

The rest of my review can be found at:
http://www.examiner.com/review/review-zootopia-goes-for-the-heart-more-than-the-funny-bone?cid=db_articles

Nose Art Pinup Girl: "You are the bomb"

I've been spending more time lately working on Zbrush. My latest render is this pinup poster I made inspired by WWII nose art. I do have a fondness for retro posters.  More playful and bit more campy. 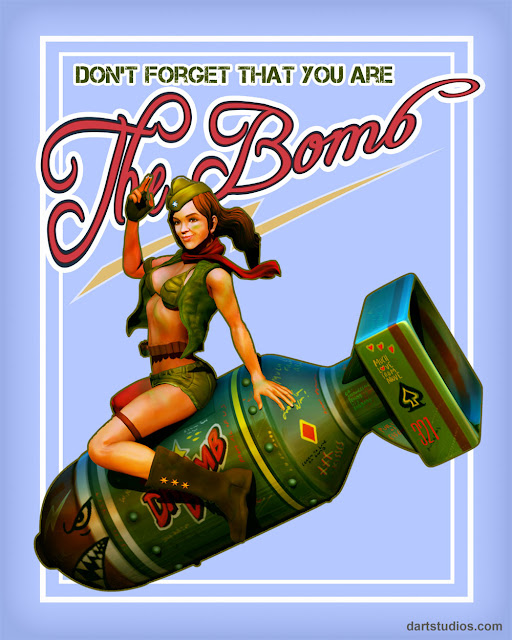 I was trying to add some kind of an inspirational saying or message on the top, but there wasn't much I could think of in relating to a bomb.  I used Photoshop and Illustrator for the text and lines.

For the female model, this was generally a way for me to work on more human muscles. Thus, the skimpiness of her outfit. I'm concurrently also working on a Conan the Barbarian model. I used the Transpose Tool on Zbrush to pose the character.  Here, you can see the T-pose version.  I was thinking of creating a machine gun for her as well, but I ditched it as it could take too long. The bomb you see is inspired by the movie, Doctor Strangelove.  Some of the words on the bomb make references to the film.  A great film.  My favorite among Stanley Kubrick's work. 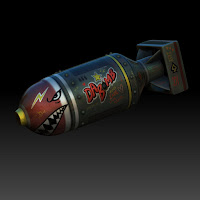