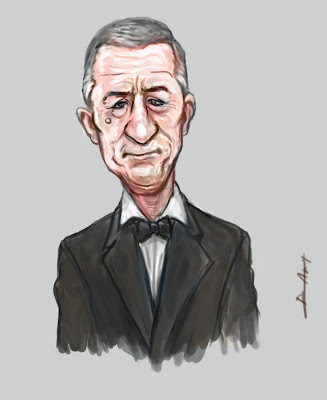 So, I made this for Caricatura Showdown 3000 on Facebook.

You know him from many great films. Taxi Driver, Godfather 2, Goodfellas, Ronin.

My Ghostbusters logo... inspired by the ever ongoing negotiations on the sequel...

So, recently, I read an article about Ghostbusters 3.  I've read Bill Murray was out of the picture and they are still doing rewrites. That, and there's a possibility of more sequels.  Hmmmm..  Well, thus I was inspired to create the this image in Illustrator.  It pretty much says it all. 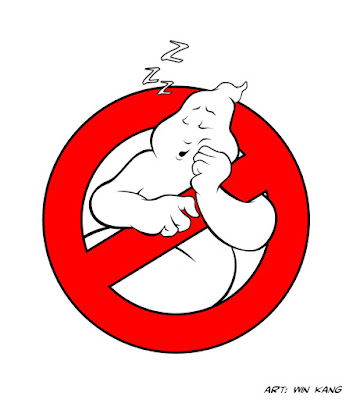 My thoughts on Male and Female Insecurities (Yeah, it's not completely art-related)

Just thought I'd use this statement to point out something psychological about society. I think the statement in its intent is quite true. What it technically should say though is that a "good man chooses to honor..." as opposed to "a real man." The statement, as such, is meant to jab at man's insecurity. Humans are strangely insecure creatures--we are insecure about what we value as important in us or what we think makes us who we are. Men are insecure about their manhood (or strength). Women are insecure about how they look. It is because we as society put value on those things to define us. In a purely biological level one might say it makes sense in terms of procreation. Beauty in women (men seeking woman) and strength in men (man protecting the family) allow humans to ensure survival. Few guys will usually care if someone says they're unattractive compared to a woman who hears it (unless he's a model or something). To feel less insecure is probably to put more value on things outside of that like character, etc (although not as valued in society). In general, telling your hubby often how strong they are and telling your wife how beautiful they are will probably ensure a fairly happy marriage. You'll notice that the unhappy ones are the ones where couples cut each other down in those areas, etc (eg. "You're a wimp!" "You're fat!").

We artists (certainly the commercial ones)  are insecure about our art abilities since much of it (more often than not) are based on other people's opinions.  Our work turns us into people-pleasers.  For many of us, it's always a balance.  You'll notice many fine artists who absolutely care nothing about what others think but base everything completely on their (often high, sometimes even "drugged") opinion of their own work.  Some of them do get rather self-obsessed and tend to stray away from society in general "for sake of integrity."

It's best to be balanced for commercial artists like us.  We are part marketers/businessmen (for the society at large and to pay the rent) and separately, we are also artists who make our own work that only we may like.  That's okay too.