via Instagram http://ift.tt/2ivygke
Posted by d_art at 3:08 PM No comments:

via Instagram http://ift.tt/2jUuLcg
Posted by d_art at 3:08 PM No comments:

Photo Entry: My coworkers gave me a Mexican Chocolate pie for my birthday! Can't show the whole pie bc I started to eat it before I took a pic. Thanks guys! #reference #ninjasonmotorcycles

via Instagram http://ift.tt/2ilPYex
Posted by d_art at 1:46 PM No comments:

Photo Entry: This time added some romaine, blueberries, arugula, and beers to my usual concoction. The beets give it a purple color. #Twitter #ninjasonmotorcycles #reference #blending

via Instagram http://ift.tt/2jAymry
Posted by d_art at 9:02 AM No comments: 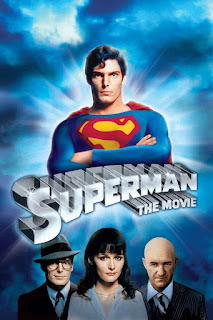 Lately, I've been watching Netflix quite a bit.  So, today I finished watching "Superman:The Movie" (1978) which I had started watching last night.  Still a pretty good movie...for the first 5/6 of the film.  I still think the ending kills the entire film. It was all good until the time-travel ending.  I mean, it's about as bad as a "it was all a bad dream" ending.  Pulling out the ol' Deus Ex Machina because Superman is already like a god?

Ya see, I have no problem with contrived endings that come out of nowhere, as long as it feels earned, or makes a statement about something. For example, the Deus Ex Machina at the end of "O Brother, Where Art Thou" (2000) is perfect because that film is a moden, jabby take on The Iliad--it is expected, given the source.  How does one not feel cheated by "Superman"'s ending?

Aside from the ending, "Superman" is fun.  I even liked the romance between Superman and Lois Lane. There's quite a bit of innuendo between them which flew over me when I was a kid. It's true they really lay it on thick during the flying scene when Lois gives her interior monologue.  A sudden interior monologue is indeed a bit of a lazy way to tell how a character feels, yet it didn't even bother me THAT much... at least she rhymed...kind of.  I gotta say one can argue that Superman comes off a bit too strong and possibly creepy by taking Lois out flying on their first date. She obviously can't fly so either she had to hold on to him or plummet to her doom.  Not much choice there.  Superman can pull this kind of thing off because he generally looks like a kind person--imagine if he looked like the Hulk or Wolverine and took the girl flying?  Wouldn't work.

Gene Hackman is a jokey Lex Luthor, but his lines were always amusing.  A joking, smart villain is preferable to an overly serious smart villain...unless that smart villain happens to be really scary, which probably wouldn't work well here since the protagonist (Superman) is this god-like, invincible superhero. Lex's whole plot to make money off of real estate by sinking most of California is just so amusing--the type only a crazy person could think up.  It's the good ol' Bond villain plot.  With that said, I didn't even like Gene Hackman in "Superman 2" at all.  He didn't need to be in it. 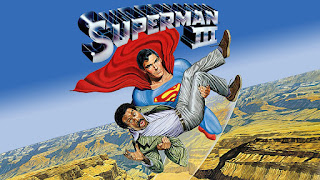 After watching "Superman 1", I skipped to "Superman 3" (1983) on Netflix.  Why?  Because I've usually found "Superman 3" to be a very fun, breezy movie.  I've probably seen "Superman 2" way too many times during childhood.  My taste for it has waned quite a bit since then.  I find the whole punching and destroying the city bit quite tiresome by now, which is majority of the plot of "Superman 2".

Tone of "Superman 3" is sillier but is actually rather clever.  If we compare this film to any superhero film today, it's not any more sillier than Avengers, Superman v. Batman, Transformers, Iron Man, Thor, etc.  You might even say the plot here makes just about as much sense as any of those films.

This film is generally about computers and why we fear them--a plot that is, yes, even relevant today (with all that talk about the future dangers of AI).  With that said, the computers back then still seemed to use Basic language.  Nostalgic fun.   Now thinking of Richard Pryor as a computer programmer--that's rather amusing...he's not the usual computer geek stereotype.  The way he steals money by stealing fractions of a cent is a fun idea...and a plot device that is used again in movies like "Office Space."  (See Salami Slicing)  The three villains in this film, while not terribly original, were fun to watch--their snappy, funny, and sometimes ridiculously unexpected dialogue kept me interested.

The most notable scene, though, is probably the fight between Superman and Clark Kent.  It's nice to see Superman actually being a bad guy, given his rather clean-cut image.  The end fight with Superman and the AI is entertainingly put together as well, complete with video game style sounds and graphics.  If one were to build a supercomputer, it should do fun stuff, and obviously this computer does just that. The things that happen in this movie are things you would only see in a comic book. The villain lady turning into a robot is pretty creepy.

"Superman 3" has its share of negatives, but I can roll with them.  They don't stand out to me to the point where I can say they ruin the overall tone or the entertainment value of the whole movie. Now, let's think about the ending of "Superman 1" again.  If you compare all of the negatives of "Superman 3" with the "Superman 1" ending, which is really worse?  Just thought I'd reiterate.

To be fair, one can still defend the ending of "Superman 1" by saying that it is making some kind of a philosophical statement.  By meddling with the fate of mankind (which he is not supposed to do, supposedly) via changing the past, Superman is basically saying one should use all of one's powers to do what is right, even if it means something that may be forbidden or not approved by authority--basically saying that passivity is a bad thing.  The problem here, though, is that whenever you can change the past, it opens a whole big can of worms....simply put, no past is ever quite perfect. Superman could be trying to change the past forever if he had his way.  Whatever the point the storytellers were trying to make, time-travel should not be the way to make that point...or at least be very clear on what the limits of a Superman's powers are so you are not cheating the audience.

With that said, all of "Superman IV" is worse than "Superman 1"'s ending, so there's that. Wow, what a horrible movie that was. Let's just call it "The Movie That Shall Never Be Spoken Of Ever Again."

This seems like a good moment to end this entry.

via Instagram http://ift.tt/2iUjCnR
Posted by d_art at 8:49 AM No comments:

Photo Entry: Sketching while waiting for the parade to pass by. I live a few blocks away. #Twitter #reference #ninjasonmotorcycles #newyears #roseparade #2017