Making Your Own Iron-On T-shirts!

Lately, I've been getting into T-shirt design.  As it usually goes for me, once I get into doing something I really get into it.  This week, I've been creating T-shirt designs, mostly for myself to wear in the office.

Part of the reason that I got into T-shirt design has been the weather.  It's been pretty hot here in California lately. I don't have a whole a lot of T-shirts, aside from the ones I've gotten for free, and it's been too hot to wear my usual, stuffy button-down shirts.  So, few weeks ago, I decided to go buy a nice gray T-shirt at Target.  It costed about $11.  It was a V-neck.  It had nothing on it.  The other shirts, which had designs on them, were about $15 or more.

Then, I thought to myself, I'm a designer. Why can't I make my own T-shirt?  Plus, it'll be cheaper.

First, I had to find a place to buy a blank T-shirt.
Then, I had to get an iron-on transfer paper, which I would print on using my computer printer.
Being an illustrator myself, I already have Illustrator and Photoshop for designing my art.

For cheap T-shirts, I looked at several options, but my favorite option, at the moment, has been Michael's.  They have various sizes, men and women, and variety of colors (black, gray, red, white, greeb, blue, lime, etc), with a cost of about $4 each and an iron-on transfer paper for about $10 (for 5 sheets).

There are cheaper places online (around $2) for blank T-shirts, but some of these sites looked a little fishy, or it would take a while for them to arrive, possibly as late as Autumn. Plus, I wanted to feel the shirt in my hands before I bought them.  The ones at Michael's were pretty good. They also had iron-on transfers.


The difference between White/Light-colored T-shirt transfers is this:

1. Whites do not show up on the T-shirt for the White/Light-colored T-shirt transfers.  White areas become transparent. This is because printers usually do not print the color white.
2. The design should be flipped horizontally (printed as a mirror image of your design)
3. You would need a hard, flat surface (cardboard on a hard surface will do) under the T-shirt.  The transfer paper with the design would go on the T-shirt with the design side (mirrored design) facing downward. You would use an already-hot iron to firmly press down on the paper (approximately 3 minutes or longer, depending on the instructions) until all of the the design is transferred.

1. Whites DO show up on the T-shirt for the dark-colored T-shirt transfers.  All blank areas of the sheet will be white areas of the design.  Thus, you will need to cut around the design with scissors or a knife, especially areas where you do not want whites to show.  Sometimes I put a thick outline in my design in the same color as my T-shirt so I won't have to cut so close to the design.
2. The design should NOT be flipped horizontally unlike the light-colored shirt transfers. What you see is what you will get.
3. You would need a hard, flat surface (cardboard on a hard surface will do) under the T-shirt.  The transfer paper will usually have a thin layer you will need to peel off on the back of the page.  After doing so, place the paper (design face up) on the T-shirt.  Then, place a parchment paper (that usually comes with the package) on top of that design.  You would then use an already-hot iron to firmly press down on the paper (approximately 3 minutes or longer, depending on the instructions) until all of the the design is transferred.


Here are my results!  The Foos is an app I'm working on with a team, so couple of these shirts are a parody of other franchises using the characters from the game. One of these is a fan art of D.Va from the game Overwatch. 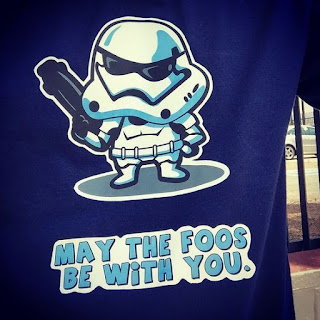 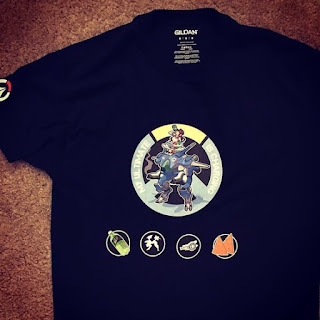 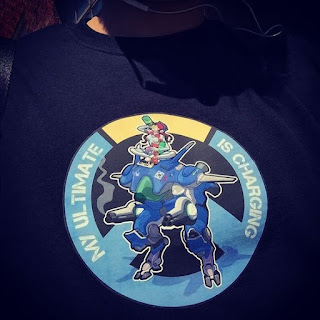 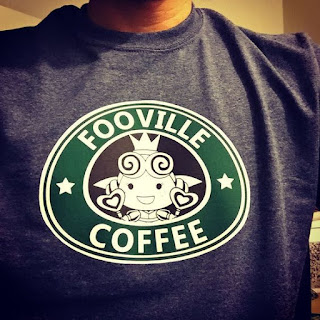 That's it for now! Have fun designing and ironing!