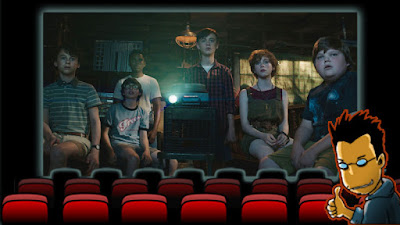 This past weekend, I saw the movie "It" (2017), directed by Andy Muschietti ("Mama"), based on the novel of the same name by Stephen King.  First off, let me say that I enjoyed this movie quite a bit--it was a highly entertaining monster flick with jump scares that surprisingly worked (which usually doesn't in many films).  The movie stars various (mostly unknown) child actors and Bill Skarsgård as an evil entity called Pennywise the Dancing Clown, which terrorizes the town of Derry every 27 years. The main protagonist of this film is the stuttering Bill (Jaesen Lieberher), who wants to avenge his little brother who was killed by Pennywise.  The film focuses mostly on the kids and their relationships, their school bullies, dysfunctional adults, and the sharp-toothed killer clown that moves around in the sewers. 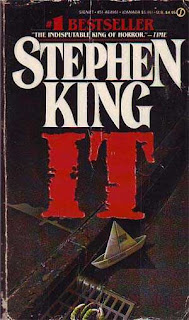 I have the novel in my house, which I never got around to reading.  I did, however, see the miniseries on TV, also called "It" (1990), starring Tim Curry as the titular killer clown.  There were two parts to the miniseries--first half took place in 1960, and the second part in 1990. The first half mainly starred children, while the second half starred adults (the same children now grown up).  The TV show was fairly creepy for TV (particularly the first half), while the second half was on the cheesier side, with monster effects that were not quite on par with theatrical films of that time.  Tim Curry ("Clue") was an effectively creepy clown, given that he often just popped out of nowhere to harass the kids.  The second half wasn't helped by the fact that it starred mostly comedians such as Harry Anderson ("Night Court"), John Masur ("License to Drive") and John Ritter ("Three's Company)--a baffling decision by the producers. Just imagine seeing a horror film starring Jerry Seinfeld, Adam Sandler, and Larry the Cable Guy, and you get the idea. 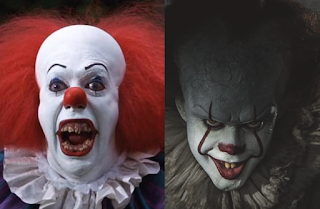 
So, this 2017 film fixes a lot of the problems that the miniseries had.  This film only tells the first half of the story (which still works as a standalone story), with only the children as the protagonists.  It also takes place in 1989, taking cues from the nostalgic, retro look and style of Netflix's popular "Stranger Things." (To note, one of the kids from the show is in this movie).  Unlike the miniseries, the creature effects in this film is impressively creepy and artistically done.  And, this movie is rated R (also quite unusual for horror movies of this ilk), which pretty much tells you that they aren't messing around.

Bill Skarsgård is excellent as Pennywise.  He is going full-on creepy-monster-mode here. This is to Tim Curry's Pennywise what Heath Ledger's Joker was to Jack Nicholson's.  This Pennywise isn't interested in dishing out any humor or making puns--he is meant to be terrible and scary.  With that said, Skarsgård's acting has just enough subtlety and the inflections of his voice to be original and interesting. The kids' acting are pretty top-notch. They feel like real kids, and their situation is often quite terrible.  Adults are unlikable here for the most part, and are often one-dimensional. Maybe it's me, but I feel this quite often in Stephen King films (eg. "Carrie") where teens or kids are protagonists--all adults seem like terrible people.

The plot isn't particularly complex--much of the story is about the characters and the horror they face.  Where it lacks in story, it has enough details about the characters  that you care about their well-being (something many horror films fail at). There is plenty of humor in this film which thankfully offsets some of the gloominess of the situation. Much of this humor comes from the 80's references to films and music, and kids' sarcastic, bad-mouthed dialogue.  Having been a child of the 80's myself, I found much to relate here.

As for the horror, as I mentioned, there is, yes, plenty of jump scares.  However, this film isn't focused on the "JUMP" part of the "jump scare" but focuses on the "SCARE" part of the jump scare. Allow me to explain.  Usually, in horror films, right when a "jump scare" comes, it's very quiet at first, then there's a loud noise (which is usually the part that scares you the most) and something "horrific" (or at least not quite as horrific as the loud noise) happens, then ends (usually quickly).  In this movie, the horrific part lingers--you get a good look at what is supposed to scare you.  The result feels earned, and not cheap.  Remember back in the day when seeing a cool, creepy creature was the big payoff?   It was the type of thing that many categorized as a well-done popcorn horror flick.  The special effects are also quite good here, many of them practical. As the miniseries failed with its lackluster special effects, this film succeeds. Without giving away details, they did well with the budget. Director Andy Muschietti has made a solid horror film.

If there are any complaints, I kind of feel that it has more to do with Stephen King's original story. The illusory part of how Pennywise operates in the world never seemed quite clear to me.  This was also how I felt when I saw the miniseries.  Maybe it's better explained in the book--the film is a bit vague on it.  And, the adults, as mentioned, are mostly stereotypes--I'm not saying that's not allowed, but such things can make the world feel less real. 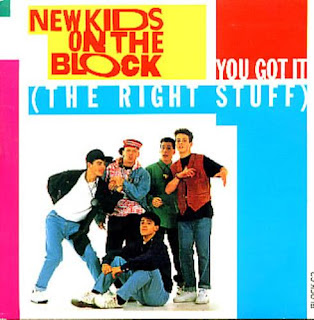 This is an entertaining horror film.  The female audiences at my theater jumped and screamed in horror more than a few times, while laughing afterwards.  If they weren't entertained, at least I was entertained by their reaction.   Many also chuckled at the "New Kids on the Block" jokes--yep, we get it, sirs. Well played, dear fellows. Well played.

If you don't like reading, you can also watch a video version of my review below.