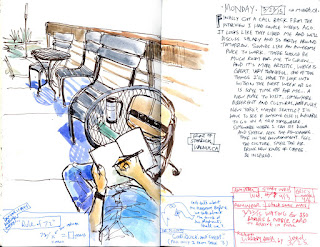 My name is Win (although Starbucks servers call me Winston). I started off this blog mostly to post art and to write. The blog was originally started because I had to join Blogger anyways so I could post work for a digital art course at one point.

Nowadays, I use it to basically post art and to write more. I carry around a sketchbook pretty much anywhere, so this blog became a good place to post some pages of that.  Otherwise, I'd probably post some digital work in both 2D and 3D. If I post things in 3D, it'll probably be things I made in Zbrush, because well, Zbrush is awesome. I will also talk about films because I used to review films for a few years when I used to write for the now-defunct Examiner.com.

My official job title is a 3D artist but I do equally as much 2D and use a lot of Illustrator. I currently work at a cool app company called codeSpark that teaches fundamentals of coding to kids while letting them make their own games and stories.  In essence, the types of apps I've always gravitated to when I was a kid.  I remember back in the 80's playing EA's Pimball Construction Set and Adventure Construction Set.  I remember making my own sci-fi RPG.

The educational computer games back then were both amazing and horrible, depending on the game. Some of the best of those were Where in the World is Carmen Sandiego and The Halley Project. I personally loved those games because they treated you like adults--arguably, they were simply educational, not necessarily kid-oriented. To be honest, one could say the same for Peanuts or The Muppets.

Anyways, before I go off into another tangent, this blog will have many of my sketches. Many of them incomplete.  Some experimental. Perhaps some comics. My sketchbook tends to be filled with architecture and watercolor, mostly because people move around too much for me to sketch them correctly. It's my traveling sketchbook, if you will. It helps me to appreciate and take note of my surroundings.