Getting back to writing..

The last few months have been busy!  I just got married, just bought a new home in West LA, moved in, got it renovated, tried to get some bills paid, papers signed, and finally I got some time to actually do a bit of writing!

It takes work to keep your writing brain intact.  I've been forgetting words often.  I have had a hard time explaining things when talking to people.  It is very different though when you have already thought about them on paper.  Writing increases thinking.  It helps formulate thought.  Ideas materialize into something tangible.  Words.  Ideas become words.  Communicable.

Ever notice those times when you have a thought, and then after a few minutes you forget what you had thought about?  This kind of thing doesn't happen when you write things down because you can always look back at what you wrote.  Thinking without a pen is a lot like scribbling on air.  None of your thoughts are visible.  They may never even have existed.  They were just part of your imagination.  Well, by definition, that is what they were, since they were in your thoughts.

Lately, my iPhone broke.  Actually, just my camera on my iPhone. I can't take pictures of my drawings. I still draw on my sketchbook, but you can't see it, at least not from my phone. I will get it fixed, but I'm somewhat unwilling to pay $100 for it.  At least not just yet.  In one sense, it has helped me to simplify things a bit.  I used to take photos of everything.  Food.  Pictures of my drawings.  Architecture.  It can get tiring and I rarely found time to look at the photos I actually took.  Now, I can.  I look pretty good on my wedding picture.  My wife looks pretty.  Nowadays, I ask my wife to take photos for me.

I now sketch more of what I see rather than take photos of them. That's a good thing for me. Analog photography, if you will. It's a lot like the photo cameras on Flintstones where a bird inside the camera pecks a picture on stone tablets.

Lately, ever since I've moved to West LA, my drive to work has been longer than usual--about 45 to 50 minutes or so. This gives me some more time to listen to podcasts, and some audiobooks.  I recently listened to a short story by Neil Gaiman called Fortunately, the Milk.  It involves time traveling and quirkiness of time travel.

Time Travel movies are fun.  Terminator 2 is essentially a flawless movie when it comes to time travel. I can't think of anything wrong with it.  It also has something very specific to say about the deterministic aspect of time travel despite its happy ending.  If Back to the Future was saying that you can change the future, Terminator 1 and 2 flat out says that you can't, at least not technically.  You can still control the future in a sense, but not in terms of there being two paths that are both equally possible (if that can even be defined).  Pretty much Terminator 1 made the point that John Connor would never have been born if Kyle Reese from the future hadn't come to the past--that pretty much puts the nail on that deterministic idea that even time travel doesn't really change history.  Terminator 2 even tries to "seem" optimistic with the idea of "No Fate But What We Make" which encourages Sarah Connor to try to blow up Cyberdyne, thinking the future is not set.  She kind of succeeds, at least in her mind.  The Terminator, his mechanical arm, and the chip is thrown into molten metal at the end, thus destroying any chance of the AI uprising....or so she thinks.  The movie, upon closer inspection, actually says that nothing has changed.  Remember the scene where Terminator loses his arm in a giant cog while fighting T-1000?  Yep, that arm that he lost is what brings about the AI uprising, not the arm that was thrown into molten metal. If we follow the same time travel logic as Terminator 1, this is exactly what happens, the future cannot be changed in this particular outlook. Of course, Terminator 3 messes up this idea by saying something "changed."

Now, Back to the Future goes the opposite direction, it is all about changing the future, and has a lot of fun with it.  I personally don't think you can ever travel to the past.  You can suspend time from your perspective, but going backwards in time doesn't make much sense to me.  Going to the future isn't very hard at all, however.  Suspended animation is one way.   I saw Back to the Future again recently, and it is still a brilliant movie.  Looking it from a modern perspective, I've come to realize that the theme of the movie is different from how I saw it when I was younger.  I now see that the movie is actually about masculinity.  The movie is really about men and their relationships to each other and how as a group communicate and learn from each other.  Marty McFly learns from Doc Brown, George McFly learns from and is encouraged by Marty, and Marty learns to understand his father, George.  It is interesting that since they are now virtually the same age, Marty can now understand his father as a peer.  Psychologists might call this something akin to a "man cave" moment.  Yes, there is romance in there also, but it comes about as the characters grow from learning from each other. So, yes, it's a bromance movie. Needless to say, it is a "timeless" theme. 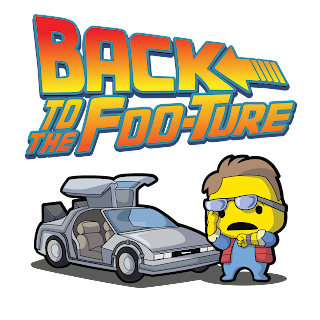