Movie Review of Pixar's "Inside Out"


I recently saw this film, which I loved... This is some mature filmmaking for the family. I wrote a movie review of it for Examiner.com.  Here is a part of my review: 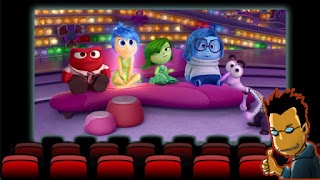 In this latest animation from Pixar, the story takes place inside the mind of Riley (Kaitlyn Dias), an 11-year old who is uprooted from her familiar and happy Midwest life when her father gets a new job in San Francisco. Inside Riley's mind is the Headquarters, the control center of her mind, inhabited by creatures that represent each of her different emotions--Joy (Amy Poehler), Fear (Bill Hader), Anger (Lewis Black), Disgust (Mindy Kaling) and Sadness (Phyllis Smith)--which advises Riley through everyday life. They also create new memories that appear in a shape of colorful orbs that powers different aspects of Riley's personality. As Riley struggles through adjusting to her new life and friends, Joy tries to keep things positive as negative emotions start to take over the controls. Things really go awry when the most important memories, known as "Core Memories" are accidentally sucked out of Headquarters through a memory tube into the rest of Riley's labyrinthine mind. Joy must bring back the Core Memories before Riley emotionally unravels.

Leave it to Pixar to turn a simple, familiar gimmick into something deep and profound. Many have called this the best Pixar movie ever. I probably would not go that far, but this is definitely the deepest among Pixar movies. It's perhaps also the most complex and mature. As someone who has much interest in human psychology, I found this film to be enlightening, thought-provoking, and challenging in a good way.

The idea of having multiple characters living inside a person's head, each representing different emotions, is certainly not a new concept. The more recent one is an animated short called "Brain Divided" by the CGBros. However, the short-lived 90's sitcom"Herman's Head" is one that many would most likely be familiar with. The problem has always been that once the gimmick wore off, you got bored with the stereotypical "mood" characters. Luckily for Pixar, they reconstructed this idea into something more imaginative and detailed. The human mind is no longer a small cramped area, but a vast, complex world/universe, with its own rules and eccentricities. In addition, these "mood" beings have other varieties of emotion as well--it just happens that they are more preoccupied with the emotions they represent. I also found interesting how the emotions are unevenly balanced--other than Joy, the rest of the emotions could be considered negative--which may indicate that it takes more work to keep oneself positive.

One can argue that like all the best Pixar films, this film is aimed for adults. The content itself isn't adult, but a mature mind will read many interesting things between the lines. There are moments of dark humor that is surreal, creepy, and just a bit out there, which isn't too far off from what a true human mind, memory, or his/her subconscious is like--they can be full of nightmares as well as happy thoughts.

There are great lessons about dealing with emotions one can glean from this film. Without giving everything away, part of it has to do with keeping important memories alive, and learning to appreciate the sad parts as well the happier parts. This is three-dimensional thinking compared to many Disney films and typical Hollywood fair. The previous great animated movie I've watched was probably "Big Hero 6" which was great, tragic, and emotionally deep for a 3-D animation. However, the elements, as great as they were, were still familiar. With "Inside Out", they have created a new world that works like a jigsaw puzzle of the human mind. Despite all the silliness, it never felt dumbed down for consumption, which is pretty cool.

The rest of my review can be found at:

If you saw it, what did you think?