Supposedly, 20th Century Fox wants to make April 26th the 'Alien Day'  Alien as in Xenomorph...(More info on http://www.slashfilm.com/alien-day/ ).  It rather annoys me when film studios try to make a "special day" for their film and expect fans to get into it, especially since the last few films left such a bad taste in our mouths regarding the franchise.

I certainly don't mind when fans create the days, though.  For example making May 4th 'Star Wars Day'--it's done by the fans and it's kind of clever ("May the Fourth be with you...").

With that said, I still thought it'd be a good time to try sculpting the Xenomorph from the film.  I do like H.R. Giger's designs.  A nice challenge for myself, too--something to make on Zbrush and using April 26th as a deadline.

Here's my work-in-progress so far: 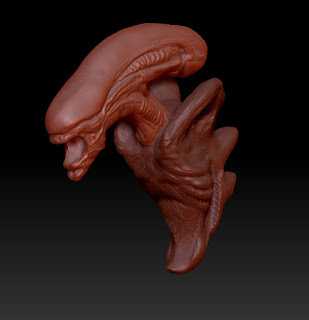